This past Friday, the annual miniatures show took place at Collector's Covey in Dallas, Texas. Well known artists from around the country sent their work to this fantastic show and I was honored to be included for the second year in a row. If you click on the link above it will take you to the exhibition page where you can view all of the artwork they had in this year's show as well as from previous years' shows. 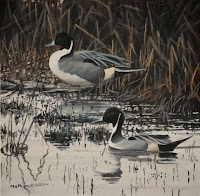 My two paintings are pictured here. The first features a flock of wood ducks peacefully cruising through a secluded backwater. The painting measures 6" x 17" and is titled Backwater Bounty. The second was one of my daily paintings titled Drake Pintails and it depicts a pair of male Northern Pintails resting in the cover of a wetland. At 5" x 5" it is truely a miniature original painting.
My Website
Posted by Peter Mathios at 7:38 PM No comments: 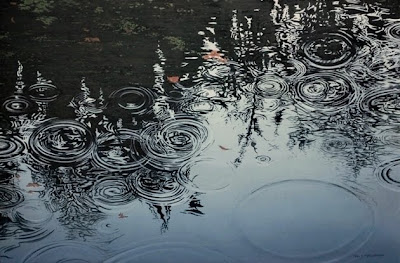 The new print has arrived! Ending Rain is a giclee on canvas that measures 16" x 24". A giclee print is an elegant, state-of-the-art reproduction that gives a vibrant color rendition of the original painting. Giclees are produced one print at a time and depending on their size, the intricate process can take up to an hour or more. The result is always the same: a beautifully reproduced work of art with the look and feel of the original. For more information you can click on the above link.
My Website

Posted by Peter Mathios at 7:13 PM No comments:

I was recently informed of some great news - the above painting, Teal Reflections, has been selected for the 2011 Ducks Unlimited National Art Package! The print will be distributed to Ducks Unlimited banquets and auctions throughout the country to help raise money for wetland habitat throughout North America. Ducks Unlimited invests millions of dollars annually into projects and land acquisitions to ensure that our children and their children have a place to enjoy the waterfowl that fill our skies each fall and winter. Each year artwork plays a vital role in their fundraising efforts and it is an incredible honor to be a part of it by being included in the national package.

The painting depicts a lone drake greenwing teal resting during the early evening hours. This shallow, marshy habitat is perfect for this smallest species of dabbling duck. Greenwing teal have always been a favorite of mine as much for their handsome plumage as for their exciting, twisting, turning flights.
My Website
Posted by Peter Mathios at 8:45 PM 13 comments: 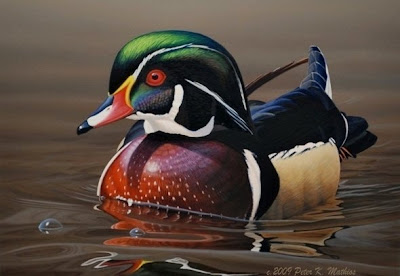 This wood duck is my entry into the recent 2009 Federal Duck Stamp Contest and it tied for 7th place. This is my highest finish ever and it was my highest point total ever. Winning the federal is one of the hardest things to do in the entire art world and, hopefully, I will get the chance to come out on top one day. Robert Bealle of Waldorf, MD won this year's competition with a beautiful painting of an American Wigeon. Fortunately, my painting placed high enough to travel with the top twenty on a national tour with the first stop being the Waterfowl Festival in Easton, MD.
My Website
My Daily Paintings
Posted by Peter Mathios at 7:01 PM 1 comment: 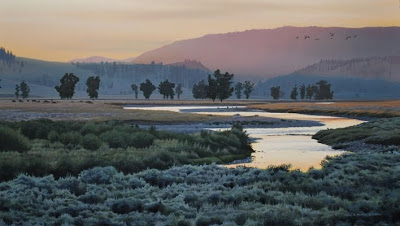 In August and September I took two separate trips to Yellowstone National Park and Grand Teton National Park as well as surrounding areas. I came away with tons of reference material of elk, grizzly bears, bison, pronghorns and numerous other animals. If you have never been, it is an incredible experience not only for the wildlife, but for the geological features as well.

One of the highlights from the first trip was seeing a grizzly bear up close. Normally, these cause huge traffic jams but it was right at first light and we had him all to ourselves for about 15 mins. as he lifted deadfall searching for insects as close as 20 yards at times. A car finally pulled up behind us as the bear sauntered off into the willows. The guy in the car looked intently to see what we were looking at but must not have seen him as he quickly drove off. He had no idea! I got some fantastic and unique photos that will inspire several paintings. I am trying to figure out how best to approach these shots to create a great painting that best captures the thrill of a grizzly bear encounter.

Above is a finished painting of the Lamar Valley titled Lamar Evening. I was trying to capture the essence of this valley where heards of bison, elk and pronghorn roam. Predators are attracted to the number of animals in this place as it harkens back to a day when there great herds of animals throughout our country. On this particular evening several flocks of Canada Geese lifted off the river and flew by.
Currently I have three paintings in the works from the trip - a coyote, a bull elk (the rut was in full swing in September) and a landscape of some aspens in front of the Tetons. I'll post them as soon as I finish them. Normally, I have posted the paintings as they have progressed, but each is far enough along now that I'll just wait until the finished product.
My Website
Posted by Peter Mathios at 8:06 PM No comments: