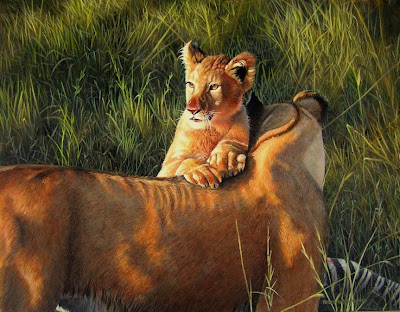 Running through the month of June at the Elsinore Gallery in downtown Salem, will be the exhibition titled Nature in Miniature showcasing 60 small works from artists around the country. The opening reception will be held at the gallery on June 2 (this Saturday) from 3-5pm at 142 High Street. Peter will be showing three of his paintings including The Future (above) which depicts a young male lion cub contentedly looking over his mothers back.
http://www.mathiosstudios.net/
Posted by Peter Mathios at 2:41 PM No comments:

Inspiration on the Road 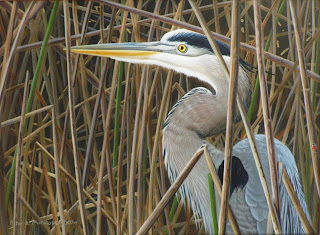 Inspiration has been known to hit me at the weirdest times. For example, with my painting 'Heron Hideaway' - I thought I was finished with the painting. It was varnished, nicely framed and ready to hang at the Peppertree Art Show. However, while driving to the show to drop off my paintings, a sudden idea popped into my head. The painting needed a ladybug in the reeds. It would add a little splash of color and a little more interest to the piece.

The painting was supposed to be dropped off Monday morning at the Peppertree Ranch the week before the show opened. While Sherrie (who helps run the show) and artist George Lockwood looked over my art and entered them into the inventory list I casually mentioned that I would like to add a ladybug to the heron painting. Their faces lit up and they both thought it was a great idea with George even offering his studio and supplies for me to paint one. I did bring my painting stuff though, and I went back to my brother and sister-in-law's house, sat at their backyard table in the beautiful southern California sun and added a ladybug to the painting. The painting was back to the ranch in time for hanging later that day and to complete the process, George went over the fresh paint with a little varnish. 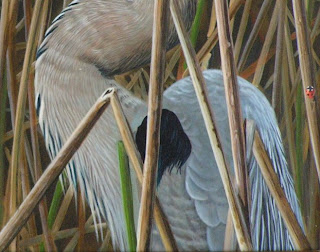 I decided to add the insect to the far left side of the image out of conflict with the heron. The viewer's eye is eventually led to the ladybug and it becomes a nice surprise in the painting.
http://www.mathiosstudios.net/

Posted by Peter Mathios at 9:08 AM No comments: 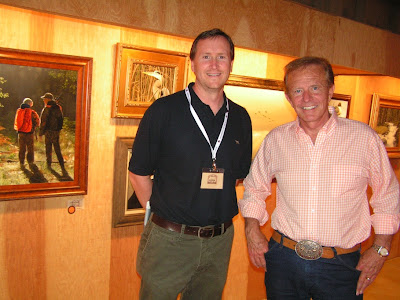 We're back and the May Peppertree Art Show (there is a May and November show each year) was a success. The turnout was incredible and I was able to meet and talk with some really wonderful people. Sales were very good as well. I sold several original paintings and the show as a whole broke an all-time sales record for the May shows! The weekend was hosted by Bob Eubanks (pictured with me above) and highlighted by the Saturday evening drawing of the intent to purchase slips and a Sunday Tri-tip barbeque. The incredible exhibition of art was very inspiring and I am anxious to get back to the easel. I will post more about the show as the week goes on...
www.mathiosstudios.net

Posted by Peter Mathios at 1:31 PM No comments:

Still on the Road

We are still out on the road and will be back soon...
www.mathiosstudios.net
Posted by Peter Mathios at 10:49 AM No comments: 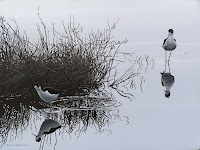 It is widely known among wildlife artists who submit to Birds in Art, the premiere avian art exhibition in the world, that if you receive the small notification envelope in the mail, the news generally isn't good. However, if you get the big envelope, there is cause for celebration. Today, I got the big envelope in the mail!! The painting "Reflections" (pictured) will be exhibited September 8 - November 11 at the Leigh Yawkee Woodson Art Museum in Wausau, WI. 95 artists from numerous countries throughout the world will participate in the upcoming exhibition.
www.mathiosstudios.net
Posted by Peter Mathios at 4:25 PM No comments: 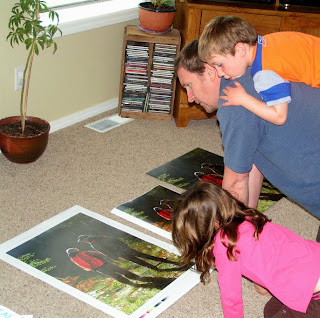 Here is a picture of me and "my staff" checking over proofs of the new print.
www.mathiosstudios.net
Posted by Peter Mathios at 1:35 PM No comments: 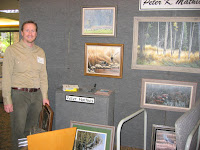 This is a continuation of the Earth Day post below. As promised, a photo of setting up my artwork. My posts have gotten a little sparse because I am trying to get some paintings finished up before traveling to CA next week. Next week? Aaahh!!!
www.mathiosstudios.net
Posted by Peter Mathios at 2:52 PM No comments: 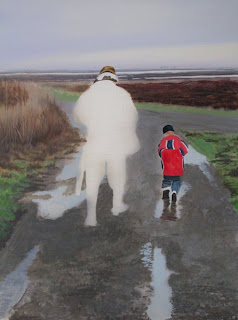 It's May and I am painting like a madman before leaving for the Peppertree Art Show in California in a couple of weeks. The above painting is going to be called Generations and is of my dad and my son on his first duck hunting trip. It is based on the same format as the painting Lessons that I did a couple of months back (and posted in this blog). There are a lot of special moments in life and hunting with my dad has provided many of them.
www.mathiosstudios.net

Posted by Peter Mathios at 4:34 PM No comments: